Ouidad is a Winner 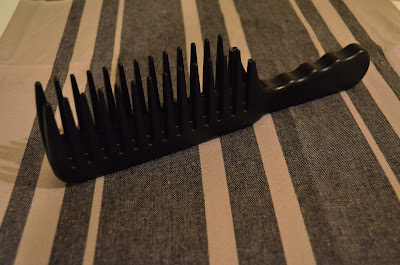 It has taken me 18 months to write this post, but I am finally ready to publicly declare my love for the Ouidad Double Detangler comb. I know that some folks aren't feeling it. Some say that it's too heavy, others say that it pulls their hair and so on. The fact is, both of those descriptions are right on the money, but are also key reasons why I love this comb more than any other I've ever used. I haven't weighed the Ouidad, but I'm fairly certain that using it should count as part of my regular workout. This same weight also has proven to be critical to my detangling process. My hair tends to bunch up in the middle, rather than tangling at the roots or the ends. The Ouidad comb is the only comb I've ever used that can not only pull through those treacherous tangles without causing breakage--and by breakage I mean that either the comb breaks my hair OR my hair breaks the comb,* but can also pull my hair firmly downward, helping to reduce the bunchy-ness (and the shrinkage that results from this bunching). It slides through large sections of my hair really quickly (with the assistance of a conditioner that has good slip), cutting the time I used to spend detangling way down. With traditional wide-tooth combs, or even with a Denman brush, it used to take me 45 minutes just to detangle. My hair is very very thick/dense, very prone to tangles and has typically been between shoulder and bra strap length (although now it is approaching mid-back). I can completely detangle with the Ouidad in 15 minutes or less. Miraculous.

The price of the Ouidad comb is another reason that a lot of naturals and curly girls seem to turn their noses up at this tool, but I have to say that, for me, it was worth every penny. I bought mine at Sephora on a tax-free weekend, so I saved myself a few cents, but if it were ever lost/damaged, I would re-purchase in a heartbeat. I can't imagine going back to the torture of a regular wide-tooth.

*(Note: If you look closely at the picture above, you can see that two of the teeth on my comb are broken. My hair did not do this. Lol. I accidentally dropped the comb and it landed on the edge of the tub and two teeth broke. It still works great though).