This past week has been full of death and loss. Much of it still doesn't, and may never, make sense. It stands as a reminder that we are not in as much control as we would like to believe. Things can happen at any time, to take your life, or the lives of people close to you.

The accident that happened on the DC Metro took 9 lives. I take the red line every day to and from Ft. Totten, one stop shy of the disaster. That crash could have seemingly happened anywhere, being out of the control of the people in charge, one of whom lost her life at the helm of the train that collided. I was still at work when I heard the news, and tuned in to CNN live on the web. They showed an image of the collision and I was shocked. Completly shocked that a catasrophy of that magnitude could reach into our every day lives from nowhere.

Later this same week, rounding out the typical trilogy of loss that started with Ed McMahon and Farrah Fawcett, we lost MJ. Michael Jackson is dead. My first reaction upon hearing this "rumor" was that Micheal can't die. He is not allowed to die ever. But he did. Somehow this happened, and he's gone. I'm still in shock really. It's hard to wrap my head around the fact that even icon's are mortal, with issues of their own, pain, fatige. They often use up their life force early, giving so much of themselves for all of us.

It would have been easy to make some sort of hair related commentary concerning MJ, and discuss whiteness and blackness... But in honor of many of the messages in his songs, those things are just not that important when talking about a life. My only take away would be, to actively live your life. Despite whatever you think about the way that you look, or the way other people look, we are all people and we are all here together, right now. We all affect each other, and we can be pleasent and memorable as opposed to jugemental and unforgiveable.
- Nisus on Saturday, June 27, 2009 No comments:

And the world goes on missing a few people. They are not in it any more, living with us- but we lived with them. Forever, it existed that we shared this space in time, in awareness and in culture. Influenced by their beauty, their creativity, and bravery. We had Pop Music and he was the king. There was a moment in time where it didn't get any better than what he gave us. And we watched, and emulated. It became our culture. We lived and grew in it- and in the world with him. That moment in time stretched on and, as it always does, time changed things. But the fact that we all lived together in that time is forever. It's in our memories and our development. For those to come, it is our history. All here together. And the rest of it all goes on, always with what they gave us.
- Nisus on Friday, June 26, 2009 No comments:

8 years is a long time

I was looking through Photos last night and I realized just how many I've taken to document my many hair styles. I was also saddened by the poor quality of most of them, often caused by taking the picture of myself. 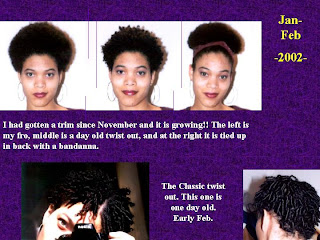 The other thing I realized is that I don't have many pictures of the first leg of my journey. I was natural for almost 5 years when I ruined my hair via pressing heat damage (the devil moves quickly!) and cut it all off again. I don't have many digital pictures of my hair before the second big chop. I'll have to scan some. Either way, a Flickr album is forthcoming. 8 years provides a nice long story to tell!

The picture is from my original old website, created 4 months after my first big chop in Early September of 2001.
- Nisus on Wednesday, June 24, 2009 No comments:

Check out the new highlights for the summer!

I did them using Clairol's Instant Whip, which is a gentle, 5 shade color lightener. I just applied it to dry curly hair, strategically selecting curls that I wanted to be a tad lighter. I really liked the way it came out. This is the 3rd time I have done them in about 5 years.


With Kinky Curly, at a window 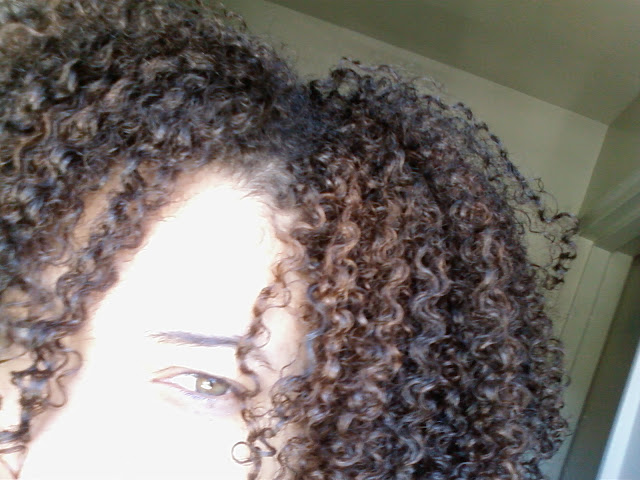 No Gel- In bright sun 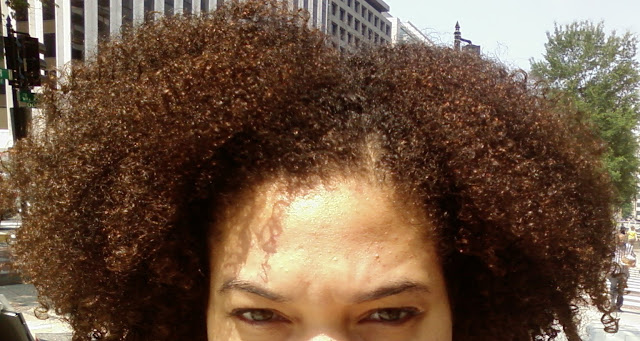 With Gel, In bright sun 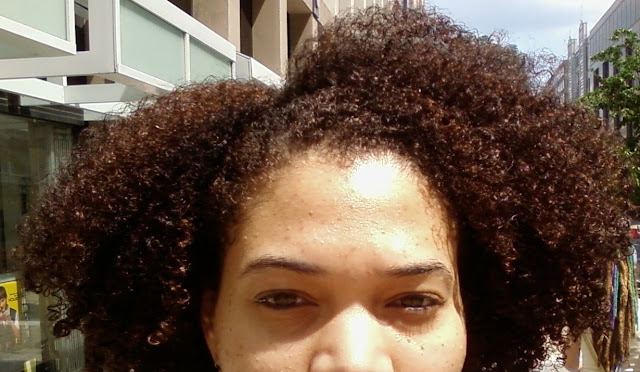 How it began for Nia

The words "going natural" never came out of my mouth when I decided to cut my hair off. Never even crossed my mind really. I actually had every intention of getting a texturiser or a relaxer again. I was just frustrated. I'd been getting my hair relaxed off and on since I was 12 years old. I had more bad hair days than good, and I didn't have the state of mind to know better.

What pushed me over the edge was moving away from home. I had no hairdresser to tell me what to do, no good friends to reinforce the standard, and no time to maintain the perpetually curly mass on my head. Even with a relaxer, my hair would curl and puff and rebel at the slight suggestion of water. I had to straighten it after it'd been straightened, which took up to two hours. I was in college and working. I wore it "curly" most of the time. It looked crazy. It wasn't really curly, nor was it straight by any means. It was just there. It grew, and broke off, and grew again, etc... I braided it, pressed it, blew it out, got a touch up once in a while.

One day I just started cutting. I went to the hairdresser and had her cut out the last brand of relaxer that was on my ends, and I also got a touch up with her stuff. It was cute, until I washed it- then it was beyond crazy. It had no weight to pull it down, it was a confused straight curly fro with different textures from different relaxers and I didn't know what to do. All I did know is that I'd just gotten another touch up, with a new and horrible frizzy relaxer brand, so I had to grow that out no matter what. So I grew it out for about 5 months- which involved an awful combination of braids and strange roller sets, and one day in late August I walked to a Dominican barbershop and had them cut it all off. I knew I had to cut out the bad relaxer (and had every intention of going back to my old hairdresser at home and getting a "good" relaxer). I had him cut it all the way down, shape up the back and sides and had about 1" on the very top of my head- the longest point. He suggested I get a texturiser and come back to him, which irritated me, given that's exactly what I planned to do. I left with dry, freshly cut hair, feeling very strange, and wanting to wet it to see if it curled.

I had a wave of paranoia when I got home and really looked at myself. Did I look like a man, or ugly, or unfeminine? I wore big earrings, bright red lipstick, and a red skirt when I went out that night. However, to my relief, I got the normal level of attention and no strange looks. I felt alright. I felt better than alright the next day, then even better the days the followed.

I became obsessed with my new little curls. Little circles would form automatically. I had to do absolutely nothing to maintain it. I felt ashamed for "dissing" my hair for so long. I felt proud that I could honestly accept compliments on my hair, compliments that now hit me as a person instead of just the aesthetic me. I felt different. I felt more me-like. It only took me a few days to decide that I would not be putting any chemicals in my hair. It took me weeks to realize that I'd "gone natural". Even then the idea of being natural did not come with other implications, such as eating differently or acting differently. However, I admit it did make me feel differently so much so that I did stop doing things I'd done for years. For example, I don't know when I last painted my nails, or when I last thought that I should. That desire just went away I suppose. I didn't even realize it'd gone until years later when one of my co-workers recommended her nail salon and I felt like she was speaking in an alien tongue.

There were other ideas that were slower to fade. I dyed my hair several times, in different commitment levels and colors. The last one was a black semi-permanent color that was excruciatingly slow to fade. I suppose I was just used to processing my hair in some way or other and so I felt the need to change my hair in some way. That too was many years ago and that desire also seems to have gone away. I missed the way my hair has slightly brown highlights at my temples, and varies from #4 brown to black. Subtly, slyly, interestingly. I also have about 5 blonde hairs on one side of my head that continue to puzzle me. Stress maybe. Interesting none the less. And mine. I'm enjoying it.

8 years ago, I cut my hair, so now it's back to the length it was before I started cutting. It's a big curly/kinky happy mass, with more of a helixy "S" pattern than a spiral. I've found gels that I like and that keep it smooth, and can even get it looking rather slick when I pull it back. I've found creams that keep it nice and soft, and some very easy styles I can do in minutes for work. I've figured out how to comb it out and when, and what to wash it with, and when. It's been a learning process that has been frustrating at times, at which times I think of either cutting or locking my hair- yet those times usually only last a day or two. I even had it pressed a few times, and was startled to see that it looks more healthy now, though the cut is a little odd because of the shape I must keep it in to wear it curly. But it can actually get very straight. I also know for sure that I don't like it that way... too much work!