I once had a white male co-worker ask me if when I had my hair pulled back it meant that I was in a bad mood. Given that I change my hairstyle so often- compared to a typical straight haired peer- I thought it was funny he worried about things like that. I told him that when I wash it I can do one of two things- let it dry big, or let it dry small, and it depended on the time I had. I also mentioned that some weeks as it gets dirtier, it gets smaller. Nothing to do with mood. I didn't go as far as to say that every time I wash it- it's an opportunity for me to wear it completely different. Unlike straight hair that dries roughly the same way whether tied back or loose, I have the option to "set my hair" as it dries, several times a week.

The idea of "mood hair" has not left my conscience, however, and today I am in a really bad mood. I woke up in a bad mood, I went to bed in a bad mood. I fell asleep with no scarf and did not care. I got in the shower in the am with only a ponytail holder in my hair, not caring to think about deciding to wet my hair or not. I then just took the elastic out of my hardly damp hair, slobed a rough fingerfull of shea butter on the ends(out of habit) and left the house. Fro flying, no shape, wearing a one piece, ethnic printed dress. I had the tune "Jimmy crack corn and I don't care" turning slowly in my mind. I got on the bus and decided to pull it back, a little, with the same lonly elastic that was around my wrist from earlier. As I manipulated my hair I began to care a little more and checked the mirrow for the shape of the fro. It was fine. I took a "bang" out and sprayed it with some water/goodstuff mixture I often carry in my purse. When I got to work, the old conversation about the bad mood came back to mind when I saw my boss. "Ha" I thought. "I wonder what they would think today"- particularly if I didn't pull it back at all. Then I felt bad. Was I indeed being insensitive by tormenting the "straighthairs" with undecipherable hair messaging? It was a funny and unrelayable thought. So many of my aesthetic hair ponderings are. Here was me by the end of the day after some further coaxing of wildness. I certainly would not have bothered if I had not been at work. 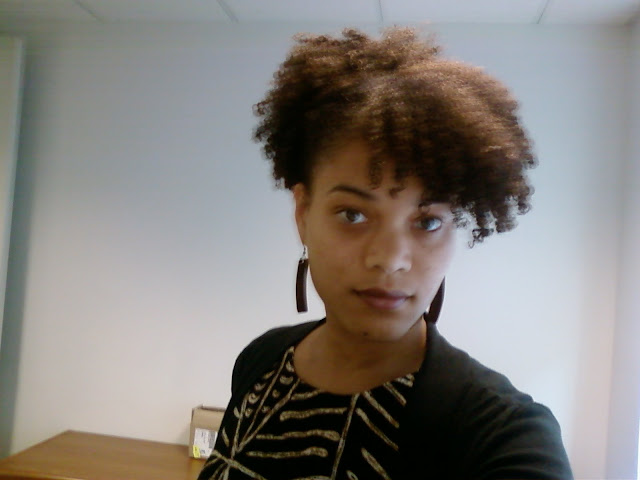 Barbados! and now I'm back.

So here was how my hair came out for my week long vacation in Barbados:

Not bad! And it lasted the whole trip with only the expected fuzziness and one braid re-done a bit looser.

Overall, I didn't take away any general hair, or even style impressions of the island. I saw a ton of relaxed hair, lots of braids, and some naturals. The ratio seemed about even to the DC area to me. The beauty supply stores looked the same, and carried most of the same products. The water didn't seem particularly hard, except for the salt water from swimming in the ocean. Over all I was thrilled that I did not have to comb my hair at all. But I must say- the true star of the trip was a solid conditioner I Bought from "Lush" called "Jungle".  I would wash my hair and then just put that in thickly and leave it in, particularly on the ends. My ends stayed soft and curly, and it smells great. It even worked on my boyfriend's looser curly hair- making it curl and shine. I got through security no problem with a huge chunk of it I bought for $11 in Georgetown. The solid shampoo was decent, but for the price I could have just stuck to the Dudu Osun black soap I always use and enjoyed its added benefits for the scalp.  When I got home, and finally took all the braids out, I washed with the solid shampoo (also smells great), and used a decent amount of Jungle as a leave in conditioner, and I was still impressed. It doesn't provide the hold of a gel, which was no shock, but it does support my curl structure and give a shine, with a glorious scent. So I definitely have a new travel buddy, and maybe more when I have the money!

The dilemma.
It will cost more than $50 - a lot more- to have my hair done. So I've decided to braid it all up, cornrows in the front, braids in the back. So I did a test braid on "nappy" 3 day old hair to see what size I should do. That lil braid curled up, shrank shorter than the rest of my hair (which has crazy shrinkage), and was hell to get out! So I decided to blow dry it first. Man, oh man, what have I gotten myself into?

I'll post the braids if I ever finish them! :-) 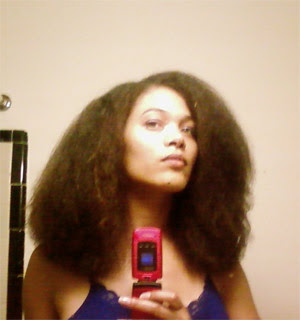 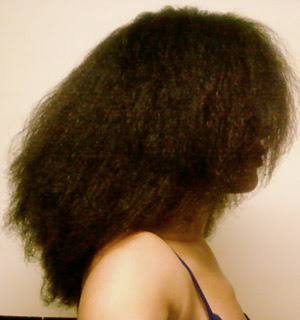 Shrinkage is a Beast with a Pretty Face

Natural Hair Length Shrinkage. Gotta love it! Cause if you hate it, you are doomed...

This is what happened when I tried using the curly primer method- leaving the conditioner in, and not much else. ( I could not resist adding a little shea butter to the ends). Welllll... My hair loved it. It was so soft and fluffy- and appreciated the light hold so much that it just curled ALL the way up. Tight, small, fuzzy coils, that were impossible to smooth one by one in any less than half a night. I gave up on the smoothing and ended up mostly running my fingers through. It did not take super long to dry like I thought it would, but the shrinkage factor was not something I'd seen since many an old product junkie day. I need my gel or custard for elongation!
- Nisus on Thursday, July 09, 2009 3 comments:

I was leaving a CVS near my job when I overheard two of the young employees discussing a woman who had just left. I never saw the women, but the convo sounded something like this:

"but she was pretty" the girl was saying.
The guy said "No, she was bald, I can't do bald headed women. ur just saying that cause I don't like it."
"I was thinking she was pretty before you even said anything! What about Amber rose? Shes a model!"
He said "but she got money- to make herself look good without hair. A regular chick can't do that. Then she just bald"
*laughter from other male employees*

I was like wow. I had just read a blog post about transitioning and going to short hair, which is often an issue I contemplate when giving transitioners advice. It's hard imagining not having any hair, for a few months, or maybe longer depending on how one chooses to wear it. Granted, most of the time the big chop does not = completely bald, but it is still a shock. Will you like it, will guys like it, will your mama like it? Is it worth it? I still say YES, but I hear conversations like this and can't help but to sympathise with the women who imagine this conversation when deciding to wear wigs, or braids or weaves, or just never go for the gusto and BC.

So I went home trying to think of some other "bald headed" women who are rocking it, and exemplify the freedom that short hair brings. I immediately thought of Zhane, Alek Wek , and Grace Jones. My boyfriend thew in Noemie Lenior. Then I got stuck. I did searches... I was stumped. I see lovely ladies on the street rocking the close crop all the time, but how do I share their confidence with a transitioner? Advice?
- Nisus on Tuesday, July 07, 2009 6 comments: