Have you listened to the glory that is Cloud 9 by Donnie? It just came on and I'm smiling, writing this and playing it back.

This song meant soooo much to me when I first heard it. I was working at a big huge bank (municipal securities) and sitting at the front desk. It was early 2003 and I had about 6-7 inches of natural hair on my head.
In Boston.
In the financial district.

I was still trying to figure out how to care for my curly and kinky hair, how to live two lives (at work and at home) and how to keep it looking "neat" all the while.  Amidst occasionally visiting the Black Planet forums on natural  hair, perusing Fotki and like 2 other sites about natural hair to fortify my resolve then, this song used to come on my streaming radio station.  I would stop everything I was doing and just zone out.  I'd smile and think about my crown and how fine I was with it.  The station did not display the artists or song titles so I wrote down some lyrics and consulted google. Donnie.  The album was called The Colored Section, which I promptly purchased and subsequently enjoyed every minute of.  It's still one of my favorite albums, like ever.

One day after that- I will never forget: 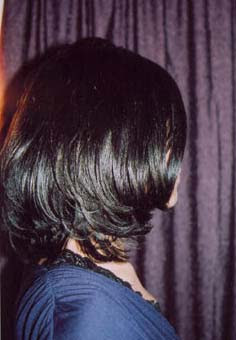 I had gone to a salon over the weekend and had my hair pressed- maybe in 2004.  It was very straight.  shiny.  swanging.  shoulder length.  and I was headed to work to debut it for all my fancy banker bosses.  I stepped out from under the shelter above the train tunnel downtown, and BAM!  An accumulated cache of old residual rain water randomly streamed down from overhead and hit me on the temple, (picture the scene from 28 days later when the blood dripped down from the bird's meal and fell right in the dad's eye) soaking a good 3 inch lock of hair near my face.  It IMMEDIATELY reverted, only there, and by the time I got to work I had a huge puffy chunk of hair ruining my new do.  I was crushed.  It was my debut of "their hair" for all to see, and I had been excited.  and I had been done in by water.  Like the aliens from signs.  I felt soooo stooopid. for my excitement, for my demise, for what I intended to show off. For the temporary state of straightness that I had gone through so much to get, and so little to loose. I was mad at my hair, and water, and mad at me.  Sigh.

But I had Donnie that day.  And I saved the style later at home, and I let some expectations go.  Twist my cloud and let it rain.

If you ever feel a bit stuck, or a bit confused and tormented by the pressures around you that nudge our beauty out of place and challenge our confidence- give this song a spin.

Yes I wear the lamb's wool, the feet of burned brass
And the wool defies gravity like the nature of a gas
And I'm fine under cloud 9

Happy to be nappy, I'm black and I'm proud
That I have been chosen to wear the conscious cloud
And I'm fine under cloud 9