SO... who still watches ANTM? *raises hand sheepishly*. I should have outgrown it by now, but it's just so darn entertaining. There are a few black and mixed girls but what brought me into my own space this week was the teasing of Brenda.

She was turned into a crop topped red head and is struggling with looking a little aged in the face. She is really having trouble adjusting to her short hair, having worn it long all of her life. Brenda reminds me of a girl after the BC, trying to adjust to life as a short haired (and nappy haired in our case) woman. Due to a personality conflict, the other ladies in the house found themselves picking on her, somewhat lightheartedly. One said she looked like Miranda from Sex in the City. I agree! And there is nothing wrong with looking like Miranda, except that she is older than Brenda would like to be considered. But another girl said she looked like Chucky :-(

Both comments spawned from her new hair cut and color. Short or curly red hair is stigmatized in the commercial-straight-hair community. Both comments really hurt Brenda's feelings but were obvious digs based on something only moderately similar. So why did the comments come into my living room and sit on my lap? Who do I get "compared" to in that same way... over and over, since 2001?

He has red hair too, but what makes him comparable to me? His CrAzy hAiR. His big, all over the place hair, forming a free form fro of sorts. I have had associates, co-workers, strangers, and even so-called suitors tell me "Oh, you know who you look like!? that character from the Simpson's! Side..." show Bob. Thanks.

I mean, it's an insult, sure. But is it based in malice? Ignorance? or just novelty and unfamiliarity? The last time I heard it however, was less than a year ago on the streets of DC- where natural heads run free. Especially on the streets downtown. I'm leaning towards malice in most cases, similar to Brenda's teasing. I think many people, MANY people, do not like big, kinky hair. I think MANY people think it is unattractive, unkempt, and inappropriate for wearing out. I think those people find humor in its appearance, and the most bold of those people will make their opinion known via "subtleties" such as likening it to crazy cartoon hair, or pointing, whispering, flat out ignoring my presence...
OR:

"Do you ever think about straightening your hair?"

"Is that ALL your hair?"

"You looked really nice in these old pictures. Straight hair looked good on you!"

"OH, I love you hair this way (pressed). It looks so ELEGANT!"

"You look like Eryka Badu/Jill Scott" (performers. NO. I DON'T.)

"Ghasp- a ball/wedding/black tie event! But what are you going to do with your hair?"

"I always think you are in a bad mood when you pull it back. What does it mean when you wear it different?"

When I was young it would bother me. Never enough to make me change it, but enough to make conscious of my "bad behavior". It made me more cognizant of the rift between the ideal beauty and my beauty. Our beauty is complex and naturally feminine and unique. I would not give my coils and kinks back for the world.

To this all I say: 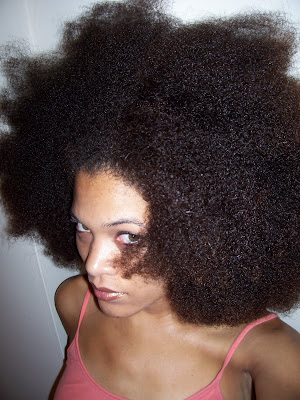 "You ever think about wearing your hair in a huge fro? I think it would look good on you." :-D

Have a nice day.