I have been so busy lately! I never really recovered from the Thanksgiving break, and now the Christmas break is coming so fast. I am also in the process of entering the housing market game so I am obsessed with all things home buying and DIY. To make matters worse, my BF is in the midst of finals week, so I have relinquished the desktop station at home to him lately.

So for my hair... Very little love. Wash and goes, then a retired wash and go pony puff, then whatever I can get away with has been my cycle for a few weeks now, despite the cold weather. But this past week, I had a few bad days. I had visions of actually cutting my hair very soon, (and buying clothes, happy clothes and boots and shoes). I decided, instead, to show off my length for once before I loose it. Maybe. It never looks long, but it is long, which just makes many styles take longer and require more skill than they used to. I pressed it on Saturday in a flourish of blowdrying and swipes with a tired, years old, revlon "ceramic" hot iron. Said iron began peeling from one of the plates halfway through pressing to reaveal- shiny silver metal underneath. sigh. But my hair came out OK. for that day. I slept in flexible curlers that night to achieve the curly wrap look on Sunday. But when I took the curlers out, I had an old school halfway straight/halfway bushy mass of hair that did not retain the curl after wrapped it and took it down a few hours later. It's in a fluffy ponytail today. I don't feel like fighting it back straight. I'll see what I can come up with while I prolong the time before I let it fully revert.

The other funny thing- is that I have been hiding it. I don't want to give any curly haters any ammunition to ubercompliment the bushy but straighter/closer to "normal" hair. I breezed by our concierge with my hat on and wore my hat sporadically throughout the day. I feel no need to show off the length any more. Funny how that bright idea came and went. I didn't want to spend the money (or risk damage) for a harder press, and I'm glad I didn't. 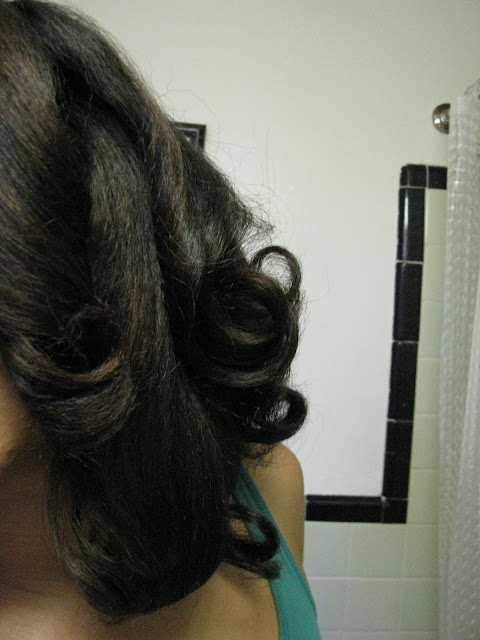