Throughout my hair journey I have had more Ah-Ha moments than I can even count. As I meet more and more natural women early in the journey of learning about their hair, I find myself recalling those epiphanies and trying my best to relay the important info. I'm going to start posting them here starting with my very first epiphany.

My hair is Curly. Tightly curly, kinky curly, not quite spirally curly. Curls as small as a chopstick to curls as big as a marker. I remember trying to achieve the curly look before I ever got a relaxer, influenced by my curly haired Puertorican friend back in CT. We were in 5th grade. She would put gel in her hair and it would be curly and stiff. My little brother called her Plastic head. One day early into the 6th grade, I tried to wear my hair curly. I put some gel in it, and I remember being satisfied enough with it to make it all the way to school. Then the very next thing I remember from that day was another girl being right next to me, grimacing and saying "Dag, yo hair is so nappy." Thinking about it now I have to assume it was wet when I left the house and the shrinkage and "light hold" of the cheap gel turned it into a very dense curl as it dried. I never wore it that way again, in fact I think I got a relaxer soon afterward. In my teens, I never revisited the thought that lead me to believe my hair could be curly like my friend's hair was.

When I cut it all off I had the impression that my hair was regular ole nappy hair. Thick and dense, fluffy and compact. But I wanted to wet it to see if it would curl. I ran home and wet it and there indeed were little coils. My hair was so short that I could hardly tell, but I was encouraged. As the days passed I was more and more convinced that my hair was curly, but more in a "inclined to coil" 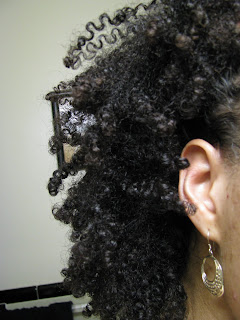 sort of way, than in a generally curly sort of way. I learned to use the coily pattern to create single strand coils, double strand twists and even wavy roots for puffs. However, I still did not know how to control the curls in such a way that I felt comfortable doing "wash and go" styles. It took several years, 3 at least, to get online and find products that helped. Black Planet was hot at the time -2001- and they had a black hair care forum that had tons of information, as well as links to Fotki albums of natural women and the website http://www.nappturality.com/. Here I discovered IC Fantasia hair gel which was the key to elongating my coily texture into curls. Curls! On good hair days I rejoiced in the fact that I had curls!! I can duplicate those days at will now with products. The discovery of the rest of my product arsenal is another story!
- Nisus on Tuesday, August 18, 2009

Email ThisBlogThis!Share to TwitterShare to FacebookShare to Pinterest
Labels: Epiphany